Lavabit, a very secure email provider, was forced to shut down today. The provider, reportedly used by Edward Snowden, was mentioned in an article I am currently writing (not yet published) and hosted one of my email accounts as well. Losing a provider like this is a real loss to those that wish to communicate privately and securely. Though Ladar Levison, owner of Lavabit, is legally not allowed to explain why he was shut down it is not hard to guess the reason. Here is a letter that currently resides on Lavabit’s front page: 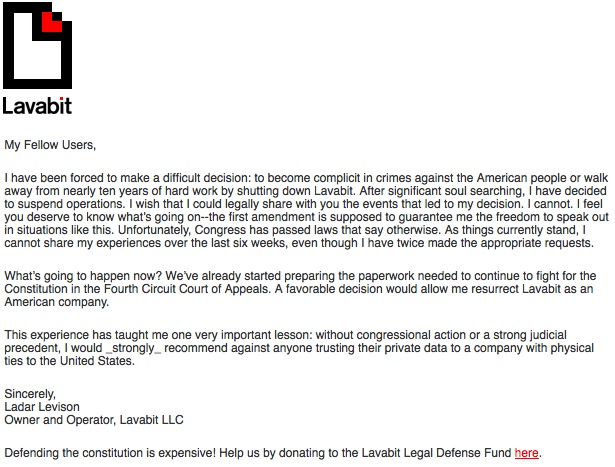 Though very unfortunate I applaud the decision Mr. Levison made. He chose shutting down the service over government snooping and crimes against the American people, something Google, Apple and others known to be connected to PRISM for example did not have the balls to do.

The letter comes with a warning. “This experience has taught me one very important lesson: without congressional action or a strong judicial precedent, I would _strongly_ recommend against anyone trusting their private data to a company with physical ties to the United States.” This is advice that’s definitely worth taking and it’s one of the reasons I’m looking forward to StartMail that should be available soon (Owned and operated from The Netherlands).

As a precaution, if you have a Lavabit account setup in your Mail client, disable it. While details of this whole scenario are unknown it could be possible that servers or configurations were confiscated by *name your agency here*. If put online this can cause your Mail client to connect to what it thinks is Lavabit but may be *name the agency again* pretending to be Lavabit to see who connects. It’s a stretch but if you can think of it, it can happen. So to be safe, disable Lavabit accounts in your Mail client until an official statement from Mr. Levison tells you it’s safe to re-enable it.

The letter you see in the picture can also be found on the Lavabit website and has a URL to a PayPal page that accepts donations. Want to do your part in defending the constitution, helping Lavabit and doing what’s right? A donation here would be the way to go! I certainly have as soon as i read the news.

I wish Mr. Levison all the best.

4 thoughts on “Lavabit forced to shut down (Silent Mail follows)”