Mr. Baldwin is upset. In an article he wrote for Wired.com named “All The Things Apple Needs To Fix in OS X” (don’t ask me why every word is capitalized, i have no clue) he lists some things that Apple needs to address. Apple needs to address this because Mr. Baldwin is “really frustrated with my iMac, MacBook Air and my MacBook Pro”. Why is Mr. Baldwin frustrated? “These magical computers I use to make movies, write music, edit my 12-megapixel photographs, document every scrap of my life and create publications that can be read by millions of people — they’re not magical enough. I want them to do more. I want them to work better. I want them to not be broken.”

Ok, so all of his computers, at least the ones he’s mentioned, are broken. We just went from assuming OS X bugs or issues to stuff actually being ‘Broken’. So let’s see the list. Or as Mr. Baldwin says “These are the things that need fixing. Your move, Apple.”

I will not quote Mr. Baldwin’s entire article. To see what he had to say just look at the article which can be found here. I will, however comment on the things in that list.

Mail
According to Mr. Baldwin Mail has been “a fractured heap of bones since Mountain Lion launched”. Sure there was a small learning curve with the new layout etc. but i have not seen any issues with it. Now to be fair, i do not use Microsoft Exchange so i cannot speak to the functionality of it in Mail, i will say that i know MANY people that use it and they experience no issues. The few that do, have alternative mail clients they can use. From personal use i can tell you that Mail handles large volume of emails over multiple accounts and a Mail folder of 26GB+, just fine. What he means by Mail failing, breaking or shutting down, i do not know. I hope to get some clarification on that.

iTunes
A sore topic for Mr. Baldwin as he has complained about it before here but let’s focus on the issue he currently has with it. According to Mr Baldwin iTunes spends 20 minutes trying to play an album and then crashes. This does indeed sounds like a problem but is it Apple’s problem? No. Again referring to my own situation, iTunes performs beautifully handling a 275GB library which has all my phone backups, Apps, Music, Podcasts and movie files in it. No issues at all.

iPhoto
The complaint here is that it does a poor job of handling RAW images and if your Mac is running slow, see if iPhoto is running. Because once you shut down iPhoto the problem of a slow Mac is solved. …..I know, this freaking Genius, Tim Cook please give this man a job!

According to Mr. Baldwin Apple wants people to upgrade to Aperture for these “pro” features like actually working with large photos. I personally don’t like Aperture, it’s way too much for me, iPhoto handles my 245GB (i recently trimmed it down from 500GB+) library absolutely fine. Even with all previews set on their largest size i can scroll through a list of 26.000 photos without a single hiccup. Just for test sake i imported some RAW photos at around 12-28MB each and whaddayaknow, no problems. No problems on my Macs with 7200rpm drives and no problems on my Macs with solid state drives. Apparently RAW photos cannot be looked at without waiting five minutes for them to render. Again, i was unable to replicate this issue. I imported the all very fast and once imported i could do whatever i wanted and even when zooming in on the largest RAW photo very fast, the render time was, well, less than a second (forgive me for not attempting to time this).

AirDrop
While this feature of OS X is not often used it is hardly forgotten but that’s not the point. Well actually it is, it goes to show how he is wrong even in small details. Anyway, the issue Mr. Baldwin has with AirDrop is that the way it works is archaic. Archaic meaning very old, old fashioned, outdated or obsolete. Funny as i didn’t see two Power Mac G4’s create an ad-hoc encrypted network between them on the fly without having to be connected to the same network. If i have somehow missed this technology being used in Macs before please let me know. Let’s dissect his claims a little.

2. If you’re on a Ethernet network, no dice. Wrong. I use nothing a mix of Ethernet and AirPort in my office and enjoy AirDrop regularly to and from any of those Macs, even the ones where my AirPort card is switched off completely. AirDrop over Ethernet works great. To be fair, i don’t know if i enabled this long ago through a very simple terminal command or if it works like this out of the box but either way, it’s possible and shows a great lack of research (meaning 5 seconds worth of googling).

His other complaint that it should be able to run in the background etc. etc. which is actually a nice security feature that ensures strangers can’t just send you random crap you don’t want i won’t even comment on. Want a background service that allows others to send you whatever they want? Hey, it’s called a shared folder and takes roughly 15 seconds to set up.

App Uninstaller
Maybe the only point i agree on, OS X needs an uninstaller. Can it easily be done with AppZapper or CleanMyMac? Sure.

Save As
“Duplicate” and “Rename” don’t cut it, according to Mr Baldwin. “Save As” must be brought back to every menu in every application. The fact that the “Save As” can easily be evolved by holding down the alt/option key when you click the File menu has apparently not been discovered yet. If he is inclined to use the keyboard command (Shift-Command-S) then simply adding the Alt/Option key to that combination results in a Save As too.

Contacts
According to Mr. Baldwin, one can not directly send a message, start a FaceTime call or email from within the contacts application. And this is of course ridiculous. What i find even more ridiculous is the fact that all of the mentioned functions are accessible right from within the contacts application. I know believe that his article was written without research of any kind. Just so i could illustrate i created a new contact and put some random (not so random) information in it. Behold, clicking on the various labels shows all sorts of options! 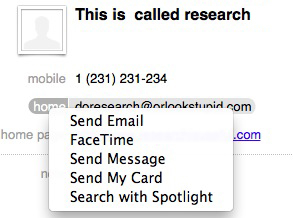 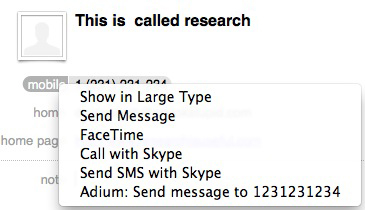 Note: Mr. Baldwin has edited his article when he found out the above is possible.

Spaces
“All those desktops can get confusing” apparently. And i agree, having more than 50 can get confusing but let’s be realistic and say that maybe 10 spaces are in use. From the small thumbnails you can easily tell what is in them. Need a specific application and it’s contents? Just click on the application in the dock and the right space will slide into view. I have found no way in which the use of spaces gets to be too confusing for me and i went as far as opening a crap load with many applications and windows in all of them.

iCloud Storage (Or just Add Integrated DropBox Support)
Again with all the capital letters… Anyway, or just use DropBox!

I personally have no problems accessing my iCloud documents. I can open TextEdit, Pages or Numbers from any of my Macs, look into my iCloud and get the documents i’m looking for. The trick? I use it the way it was designed to be used.

So what’s my problem with this list? They are all non-issues. All of the items on this list function the way they are meant to function. Instead of performing a tweak here and there or using alternative solutions that do function the way Mr Baldwin wants, this list portrays all these features to be broken, as in not functioning the way they should. So what? Mr Baldwin is free to write about whatever non-issues he wants isn’t he? Indeed he is and i would have had no issues with the article if it was on a personal blog somewhere where i would not have found it. Instead i found this on Wired.com where i go to get (mostly) good information. A website with the amount of readers like Wired should screen the contents more carefully. In Wired’s about section it reads “WIRED is the first word on how ideas and innovation are changing the world. Each month in the magazine and every day online, our editors deliver a glimpse into the future of business, culture, innovation, and science.” How does this nonsense fit in there? The screen space and Mr Baldwin’s time could have been MUCH better spent on writing about something that is true and accurate, something worth reading.

My two cents.
Mail is not reliable, breaks or shuts down – Sounds like system issues, not a Mail issue. Again i can’t speak to MS Exchange functionality.

iTunes is very slow and crashes – Sounds like system issues, not an iTunes issue.

iPhoto performs very poor – Sounds like a system issue, not an iPhoto issue.

AirDrop doesn’t work the way he wants – Tweak it, set up a shared folder or use another service. Not an AirDrop issue.

App Uninstaller – Use one of many app uninstallers out there or clean up manually.

Spaces – For the very confused writer of today, may i suggest 10 actual monitors as the spaces preview is obviously too small.

This is not an attack on Mr. Baldwin. I don’t know him or his other work, i just wanted to write about his latest article. I do not look to offend but merely hope to cause more research into future articles.

I know this post has nothing to do with security and has no place on this website but as i had no other place to put it (apart from my Facebook), here it is.

3 thoughts on “What i think of Mr. Baldwin’s article”