The year is 2011 and Intego has two antivirus solutions available in the Mac App Store; VirusBarrier Express and VirusBarrier Plus. These were my go-to recommendations for anyone that wanted or needed an antivirus product. In 2014 the apps were pulled from the App Store as the limitations the App Store placed on apps were hindering the functionality of the products. I could have kept on recommending Intego but people were much more willing to grab an app from the App Store than downloading a full installer from the Intego website and running a trial of their antivirus suite. With no other App Store options available worth mentioning, my recommendation shifted to Thomas Reed’s Adware Medic script. And this simple and effective scanner (which later turned into an app and then turned into Malwarebytes for Mac) has been my recommendation for three years. Until today!

Don’t get me wrong, Malwarebytes for Mac is still a solid little scanner. It has a list of malware signatures and the locations that malware typically hides in and goes after it. A scan typically takes a minute or less and is a good indication to see if a full system scan from an actual antivirus product is warranted. My recommendation is typically “Malwarebytes for a quick scan and if it finds anything or you want to be sure your system is clean, go Intego.” and this has worked out well for a lot of people. Some stuck with Malwarebytes, some shifted to Intego.

Today Intego launched VirusBarrier Scanner, available in the App Store and compatible with any Mac running OS X 10.10 or later. And with that, my recommendation has immediately shifted back! I have been testing VirusBarrier scanner for a few weeks now and found it a solid little app. It’s powerful, capable, backed by the full catalog of virus definitions that their VirusBarrier X9 product uses and most importantly; finds and eradicates all kinds of malware.

There are still users out there that run the old VirusBarrier Express (which has continued to function and receive virus definition updates). If you are one of those users, I still recommend downloading the new VirusBarrier Scanner, I’ll explain why. 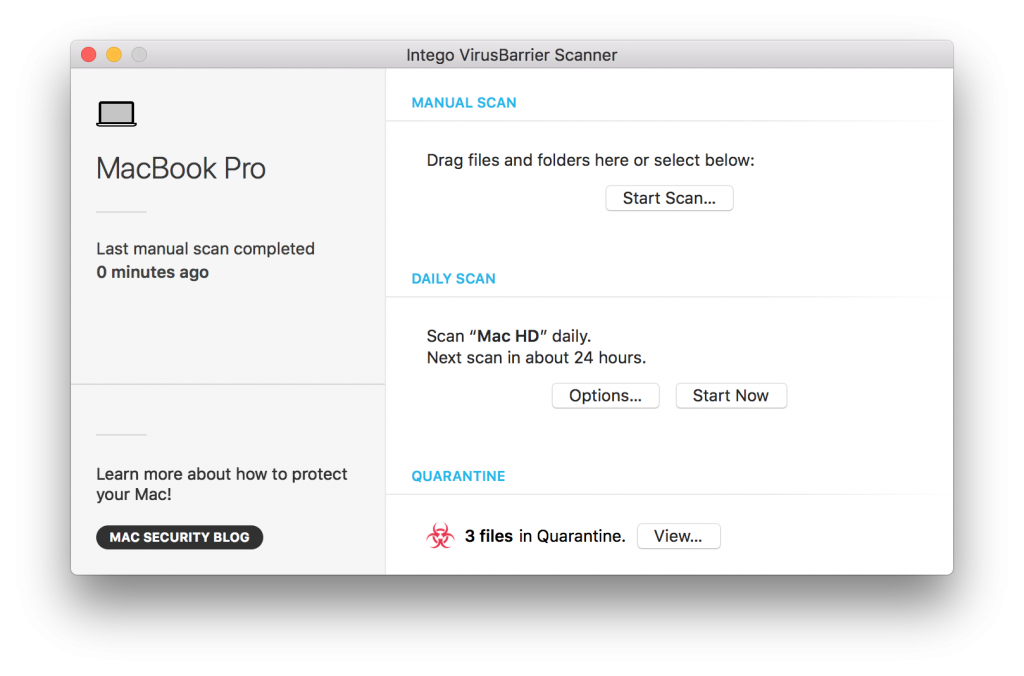 Slick, fast and effective. Everything you want in a free malware scanner. I suggest you go grab it right now!