A little while ago I wrote about Startpage and though it is my search engine of choice and I recommend it’s use to anyone I also mentioned that adding it as your browser’s default search engine was a bit of a hassle. Startpage does not have a browser extension that makes it very easy, instead a piece of software has to be installed called Glims. I mentioned that Glims has been the cause of some stability issues for me in the past, Safari froze often and sometimes took the whole Mac down with it, so I have not used it again since. Then I started thinking, how long ago was it that I had these bad experiences with Glims? It’s been more than a year, no, wait, this was when I still lived in the old place so… Wow, it’s been four years! I have to give Glims a fair shake and see if the software has improved. If it’s any good, this will make things a whole lot easier for those that prefer Startpage or their sister Ixquick as primary search engines. (Firefox users go here instead) Let’s begin.

What is Glims?
Glims is a Safari plugin that enables additional features in the browser.

What are some of it’s features?
Custom search engines (the feature we’re after in this article), select a source for search suggestions (the stuff that pops up as you’re typing a search), search results thumbnail images and favicons in every tab (I like this).

Installing Glims
You can get Glims here. Once you’ve downloaded and opened the installer walk through the first few steps until you see a version selection. I was very happy to see this as I don’t like adding bulk when I don’t need it. In this case the goal is to add a custom search engine, this is something both versions can do so I went with the Light version. The next step is Engine selection and whatever you pick here is not important as we’ll be changing it to Startpage anyway. Finish the installer and restart Safari.

Setting up Glims
Access Glims settings through the Safari Preferences. Once you’ve located the Glims settings click on “Search Engines List” and uncheck all boxes in the list (including the one for Startpage that is already there).
Note: Even though a Startpage preset is already included in Glims, the query is different from the one that is suggested on the startpage.com website. So I just went with Startpage’s example to make sure everything works as it should. 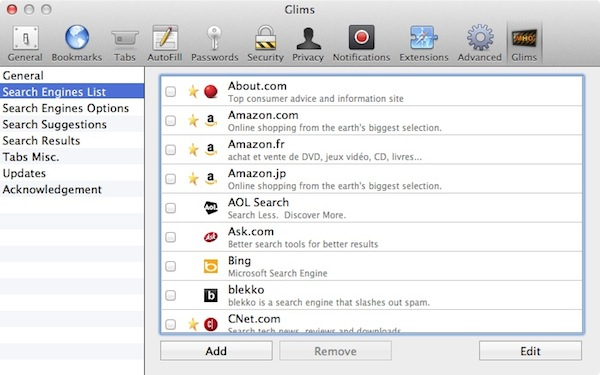 Then click the “Add” button, give the new Engine a name and replace the google string that’s there with “http://startpage.com/do/search?language=english&query=#query#” (without the quotes). Click Set and close the preferences.

Now restart Safari or select or click on the search engine logo and select the new engine.

Uninstalling Glims
If you don’t like Glims or it’s causing issues for you, here’s an uninstaller that can get your Safari back to normal.

That’s it! I have only tested the Light version of the Glims plugin and it has been working well. Hopefully Startpage will create a browser extension that makes this whole process even easier but for now this 5-minute setup will do.

3 thoughts on “Adding Startpage to Safari”